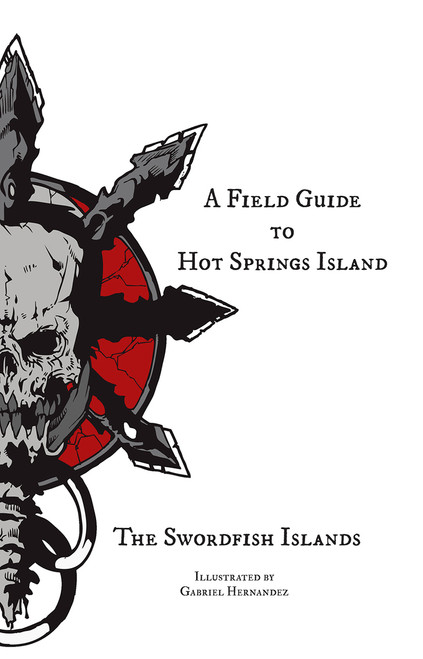 Fewer than a hundred of the adventurers recruited to explore Hot Springs Island have made it back to us in one piece. However, every man and woman savvy enough to stay alive has returned with bags of treasure and a whole bard’s worth of stories. They spoke of steaming jungles filled with magical plants, lost ruins, ravenous creatures, and vengeful, feuding factions. We compiled their firsthand accounts, polished them off with a bit of wild assumption, and wrote it all down in this book—A Field Guide to Hot Springs Island—for people just like you.

Now, if you’re wondering why we’re giving you something so useful for so cheap, that’s good. Questions like that are why we picked you. Our angle is simple: The more you know about the island, the longer you stay alive. The longer you stay alive, the richer you’re going to get, and the richer you get, the richer we get because the guild always gets its cut. How rich can you get? Well, so far there have been ten fine fellows who have paid off all their bounties on the mainland and retired in as little as six months, and there’s at least one ex-marine who went on to buy herself a nice little kingdom in the Red Hills.

If you’re worried you’ll be at a disadvantage because you’re not clever enough to read, don’t be. There are drawings of every creature we know about, so you can flip through this guide and match our picture with whatever’s currently eating your companion. Then again, even if you can read, many of the things encountered here on Hot Springs have not been recorded elsewhere (that we know of), so the names of places and creatures have emerged over time. We’ve done our best to reference everything by its most popular name, but for every name we’ve written down, there are probably three others that didn’t make the cut.

Discoveries are being made daily here on Hot Springs Island, and if you find something new, or uncover something really old—especially if you see an ally die to it—let your guild representative know. We always pay handsomely for good information.

240 pages. Fully illustrated. Contains 2 short stories, entries for 24 different magical and mundane plants, 34 monsters native to Hot Springs Island, and details about the 6 factions that can be found there.

The Field Guide is written "in character" for the world, and is an in game object. Players are encouraged to reference it at the table as it contains plenty of hooks and reasons to travel through the Hot Springs Island sandbox.

The Dark of Hot Springs Island is a companion book to the Field Guide, and contains everything a Game Master needs to run a game there (except stats) in the system of their choice.