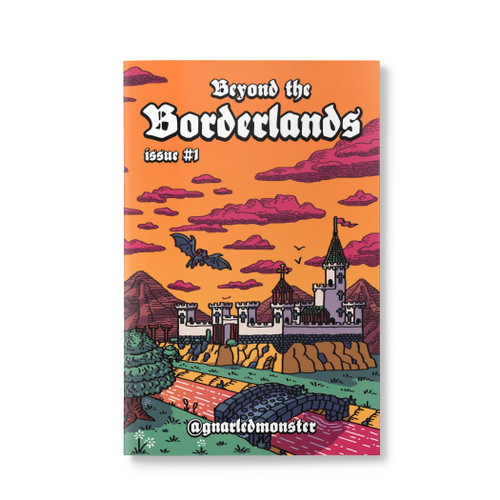 Swordfish Islands has teamed up with the amazing Alex Damaceno (@gnarledmonster) to bring you physical zine copies of his fantasy wilderness hexcrawl: Beyond the Borderlands (Issue 1).

Adventure awaits in the Wicked Palovalley out beyond the borderlands!

Beyond the Borderlands #1 is a system neutral regional hexcrawl inspired by the classic D&D adventure Keep on the Borderlands (B2). The Stronglaw Keep defends the Western Kingdoms against invasions from the monsterous forces of the Wicked Palovalley. The Palovalley is presented as a 36 hex hexcrawl, divided into 6 different regions, each one with its own list of content, rumors and random encounters.

Brazilian author/illustrator Alex Damaceno has brought the valley to life with evocative details, and still managed to bundle it into a quick 20 pages of content. Like all good "overworld" adventure settings, the area is peppered with holes to the "underworld". Those dungeons are in the process of being written up and illustrated and will be released in the next issue (coming soon!). A third and final zine will fully flesh out the NPCs, monsters and factions of the valley, and present them all as printable paper miniatures (coming later!).

Even though more is on the way, Beyond the Borderlands #1 contains plenty of content for multiple sessions of exploration and factional intrigue!

Down and out in Dredgeburg